Kiana Green: "Nobody Knows Her Name"

Nobody Knows Her Name 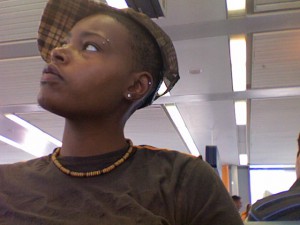 Kiana Green completed her B.A. in American Studies with a minor in Africana Studies at Williams College (2007). As an undergraduate, she was a recipient of the Mellon Mays Undergraduate Research Fellowship (2005–2007). She worked on two projects as an undergraduate, “Redefining the Promised Land: The Politics of 20th Century Black American Poetics, Identity, and Language,” and “Black, Word!: An Exploration of Linguistic Hegemony in the United States.” While at Williams Ms. Green was active in QSU, BSU, Gospel Choir and the Jazz ensemble.

She spent one year in the English graduate program at USC before transferring over to American Studies and Ethnicity. Her research interests include, African American Women’s History, Literature and Film, Black Queer Studies, Theories of Power and Violence, Feminist Theory and Cultural Studies. She is currently working on a project examining Black gender transgressive women and violence. Dr. Robin D.G. Kelley and Dr. Jack Halberstam serve as her advisors.

On February 3rd in Goodrich Hall Ms. Green will host an open-mic at 9 PM.