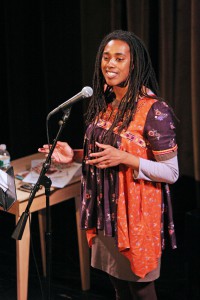 In July 2008, Women Center Stage at the Culture Project launched the off-Broadway production of Moïse’s EXPATRIATE. The New York Times calls the play “inspiring… invigorating…compelling,” anchored by “a searching, intelligent script.” She currently tours her acclaimed 90-minute solo show Womb-Words, Thirsting which fuses spoken word, storytelling and song for a high-energy event about growing up bi-cultural, immigrant and queer.

She has been a guest artist at Brown University, Carleton College, Colby College, Cornell University, Dartmouth College, Evergreen State College, MIT, the Ohio State University, Skidmore, Wesleyan and Yale, among many others.

Moïse is a regular blogger for OurChart.com. Her writing is also featured in a number of anthologies, including: Word Warriors: 35 Women Leaders in the Spoken Word Revolution and We Don’t Need Another Wave: Dispatches from the Next Generation of Feminists. She has been commissioned to write plays for the Drama Studio, the Kitchen Theatre Company and Serious Play Theatre Ensemble. At age 20, she co-wrote the screenplay Sexual Dependency with Bolivian feature-film director Rodrigo Bellot. Her debut spoken word CD, Madivinez, won the 2007 Patchwork Majority Radio Award for best solo album. She lives in Northampton, Massachusetts.

“This summer, I met a professor coffee in a bustling shop in New York City’s
West Village. On the way out, he swiped a pamphlet from a table and handed it to me. ‘I’ve heard good things about this play,’ he said casually. So, when a friend and I found ourselves outside of the noted theatre a couple of weeks, we wandered into ‘Expatriate’, Lenelle Moise’s two-woman show. By the next day, I was jamming in the subway to her spoken-word CD ‘Madivinez,’ feeling delightfully subversive crushed between business suits as Moise’s smooth voice sang, ‘A girl like a white light converted me faithful to the good church of queers…'”

“But Moise’s work is so much more than a good beat. From recounting a childhood fight to meditating on the aftermath of Hurricaine Katrina, Moise refuses to dissociate her personal experience from the broadly political.”

“Nor will she break herself down in digestible chunks, and her work sits in the fraught and productive territory of the intersection of a number of categories of identity including race, class, gender, family history, and sexual orientation. Lenelle Moise presents her mission as ‘queering the divine, one word at a time.’ I love the idea of changing—through art—our paradigm.”

“Who/what do we exalt as our archetype, and how does proximity to that model dictate privilege?  What does Williams ‘look’ like? And how can we make it ‘look’ more like us—all of us?”

Time Out New York: The word is out