Film: The Color of Fear 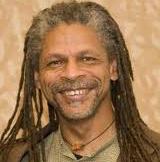 An award-winning race relations documentary, “The Color of Fear” brings together Eight North American men, two African American, two Latinos, two Asian American and two Caucasian were gathered by director Lee Mun Wah, for a dialog about the state of race relations in America as seen through their eyes. The exchanges are sometimes dramatic, and put in plain light the pain caused by racism in North America. Post-film discussion will be led by Victor Lewis, a leader in the Field of Anti-Oppression Diversity Work and Alliance Building.
View a clip from the film
Event poster (PDF)
MainStage, ’62 Center

Perspectives from the Front Lines of Change at Williams: Fraternities, Co-Education and Stand With Us

The past 50 years have seen Williams evolve from an all-male, fraternity based institution to our broadly diverse community of today. The abolition of fraternities in the early 60’s and the advent of co-education in the 70’s were pivotal times of culture change in the College’s history. More recently, the student led Stand With Us movement exemplified the power of a communal voice to educate and alter existing dynamics within our Williams culture.

Join alumni and former Williams faculty and administrators as they share their first hand accounts of life at Williams during these times as well as the leadership roles they played within the community. Break-out discussion groups will follow their stories as we explore dynamics that have changed, and those that continue, within the Williams culture from the past 50 years. Panel members include John Hyde ’52, Nancy McIntire, Emanuel Yekutiel ’11, and Sara Dubow ’91, Moderator.
Griffin 3

Psych in Real Life: How Social Psychology Can Help Us Claim Williams 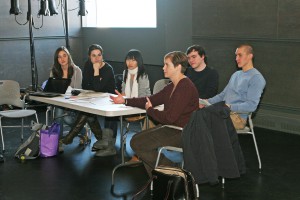 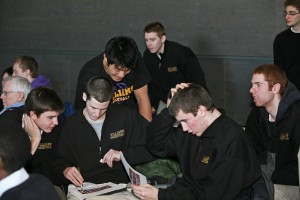 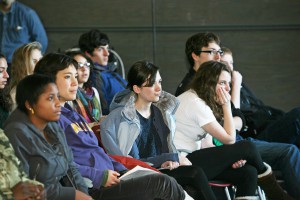 Students from PSYC 349 (Progress and Problems in Intergroup Interaction) will present and lead discussions on psychological studies which may help us improve interactions between people of different social identities at Williams.

Social psychologists have conducted extensive research on topics that are highly relevant to the problems that Claiming Williams seeks to address. By discussing these findings together, we can come away with tools that can improve our daily interactions at Williams. Students from PSYC 349 will present and lead discussions on topics such as colorblindness, race relations, and discrimination to help put research into practice at Williams.
Directing Studio, ’62 Center

Unraveling the Knot of Privilege, Power, and Difference with Allan Johnson 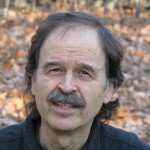 One of the greatest barriers to ending sexism, racism, and other forms of privilege is that we are trapped in cultural ways of thinking that turn conversations about privilege and oppression into occasions for dominant groups to feel guilty and defensive. As a result, the conversations we need to have either happen badly or, more often, don’t happen at all, making it all but impossible for us to assume responsibility to act effectively for change in our communities. This presentation can help overcome that barrier by providing an alternative way of thinking about issues of privilege. It is based on the author’s books, The Gender Knot and Privilege, Power, and Difference. For more about Allan Johnson, visit his website.
Event poster (PDF)

Allan G. Johnson is a writer, teacher, and public speaker who has worked on issues of privilege, oppression, and social inequality since receiving his Ph.D. in sociology from the University of Michigan in 1972. After almost 30 years of college teaching, he now devotes himself to writing and public speaking. His nonfiction books include The Forest and the Trees: Sociology as Life, Practice, and Promise; The Gender Knot: Unraveling Our Patriarchal Legacy; and Privilege, Power, and Difference. His work has been translated into several languages and excerpted in numerous anthologies. His most recent book, The First Thing and the Last, is a novel about healing and redemption in the aftermath of domestic violence.
Brooks-Rogers Recital Hall

Let Me Tell You A (Really Fast) Story 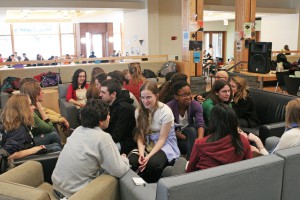 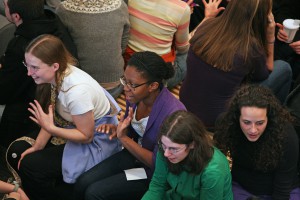 Ever wonder what all those people you pass on your way to class are thinking? Ever want to tell them what’s on your mind? Storytime is hosting “Let Me Tell You A Really Fast Story,” which is your chance to put stories behind the names and faces of the students, faculty, and staff around you. Each participant will alternate listening and telling stories, for three minutes each, in a kind of platonic speed-dating. What you hear might surprise you!
Baxter Great Hall, Paresky

The Art of Dialogue at the Museum

Come to the museum to discuss provocative artwork by Kara Walker, Glenn Ligon, and Pepon Osorio, and consider how these artists confront issues of class, race, gender, and privilege. This facilitated conversation will help us to share our stories and will conclude with reflection on the art of dialogue itself – and strategies we can use to address uncomfortable issues. Maximum 20 people, first-come, first-served.
Rose Study Gallery, Williams College Museum of Art