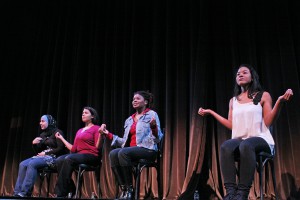 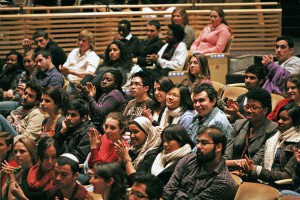 From the moment Urbintel decided to bring 4 females together to share their stories of maturation, history, or rather herstory, was in the making. Itsrealight, Labruja, Pandora Scooter, and Narubi Selah ingeniously paint and present vivid pictures of a female’s struggle in a male-dominated society. They give their true accounts of women being reared in America. Through the genre of Spoken Word, combined with rhythm and chorus, original anecdotes are weaved into one story; the story of many women. While dealing with the issues of politics, health, love, and religion, stereotypes are confronted and so-called truths are challenged.

Itsrealight, a dark-skinned woman from Brooklyn, shares her experiences of being rejected in a society where full lips and wide noses are not so gently looked upon. The highly debated issue of abortion and pro-choice is explored as Narubi Selah illustrates the anxiety of a woman sitting inside an abortion clinic. And while Pandora Scooter questions the male-chauvinistic definition of what a real woman is and is not, Labruja defies her family’s traditional religious customs, which suggest that women are inferior to and subjugated by men.

Combine this with rhythm, chorus, and strands of comedic characterizations; you have a warm-heartfelt and provoking masterpiece. These are their voices, retelling, reliving, and reshaping HerStory.

Our Stories, Our Responsibilities, Our Community: Where do we go from here?
Community Camp Fire
Claiming Williams MENU