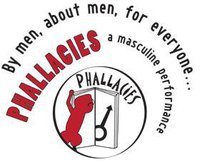 Phallacies explores relationships to masculinities and individual and community health, and challenges viewers to rethink many of their attitudes, assumptions, and political and social understandings of hegemonic masculinities.

Ranging from quite serious to very silly, the performance is a series of monologues and skits, each of which explores some aspect of masculinity. Our goal is to support and encourage college men to think about their actions as men and to present alternatives ways of being a man that are healthy for individuals and communities. Specific topics include male socialization, intimate relationships, homophobia, race, sports, violence, alcohol, speaking out against sexism, and much more.
Adams Memorial Theatre, ’62 Center

“Navigating Williams” and Navigating across Differences

Sarah Bolton, Dean of the College, and Michael Reed, VP for Strategic Planning and Institutional Diversity will present “Navigating Williams” – a series of videos produced to help students become aware of and leverage a variety of strategies and approaches that contribute to a successful first year experience – and lead a discussion afterwards. The idea for the videos emanated from a research project, conducted four years ago with many first generation students, that was aimed at understanding some of the challenges they face in striving to succeed at Williams. The initial research project culminated in a video called, “Experiencing Williams.” “Navigating Williams” has three parts, focusing on “Identity,” “Academics,” and “Social Life.” While the videos were initially targeted for first-generation students, they impart strategies that can be beneficial to all first year, as well as other, students
Paresky Performance Space

Why Socioeconomic Class Matters at Williams

This workshop explores the privileging within elite colleges of analytic intelligence over other forms of intelligence and engages students of diverse socioeconomic backgrounds in an exploration designed to cultivate emotional intelligence, social intelligence and creative ability. We recognize that one of the root causes of the disparities and racial intolerance that currently beset the Williams College community is the truth embedded in this statement by Martin Luther King, Jr.: “Men hate each other because they fear each other, and because they fear each other they don’t know each other, and, they don’t know each other because they are often separated from each other.” Holding the firm belief, as did Gandhi, that “until the hearts of men change, nothing will change,” this workshop facilitates the “head to heart” shift to engender a new grammar of compassion – compassion for self and others.

The common misconception that the term “Asian American” is synonymous with “Asian” often leads to confusion as to why Asian American Studies, a valuable intellectual discipline that is vital to understanding American history, identity, and culture, is separate from Asian Studies. This panel discussion will also address how Asian American Studies would benefit Williams in creating a more diverse and inclusive campus. Panelists consisting of Williams professors and students, as well as a guest professor from outside the college, will speak about their experiences with Asian American Studies and other interdisciplinary ethnic disciplines.

Speak Up, Be an Ally: Creating a Williams Without Sexual Violence

This in-depth, skill-building discussion focuses on how to safely act to challenge inappropriate sexual and violent behaviors that happen at Williams. It includes current research that reveals why people do or do not intervene as well as discussing our role as allies in creating a safe community through various activities and scenarios. Max of 40 people.
Schapiro 129

“Stand with Us” Then (and Now?): The Historical Context of Student Responses to Hate at Williams

Eight recent alumni discuss the 2008 Stand With Us movement and the history of Claiming Williams Day in a short film. Discussion following the film will allow event attendees to reflect on the history of student movements against hate and discrimination at Williams, and to consider how knowledge of this historical context can affect our understanding of the response to November’s hate crime.
Griffin 6