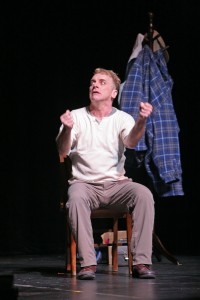 BEYOND WORDS a collection of Mime, Music, and Monologues: a poignant journey that continues Bowers’ ongoing investigation of silence in our culture. Set against the backdrop of “Small town America.” One of the most acclaimed mimes in America today, Bill Bowers’ eloquent movement evokes the deepest truths of the human condition. Often compared to Chaplin and Keaton, Bowers has truly created a style all his own. Bowers is a student of world-renowned mime Marcel Marceau, and has performed and conducted workshops throughout the U.S, Europe and Asia. Intended for Williams students, faculty, and staff.

We are pleased to announce that Bill Bowers recently received the Best One-Man Show Award at the 2012 United Solo Theatre Festival in New York City.

Who Are You Calling a ’Ho?
Harmonizing Home
Claiming Williams MENU