What Difference Does it Make? Politics, Activism and Scholarship

View a video of highlights from Melissa’s talk. 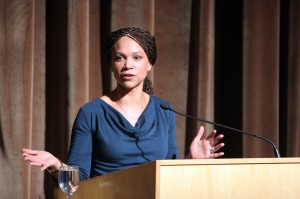 Melissa Harris-Perry is a professor of political science at Tulane University, where she is founding director of the Anna Julia Cooper Project on Gender, Race, and Politics in the South. Harris-Perry is the author of Sister Citizen: Shame, Stereotypes, and Black Women in America and Barbershops, Bibles, and BET: Everyday Talk and Black Political Thought. She is a columnist for The Nation magazine, where she writes a monthly column also titled Sister Citizen. In addition to hosting her own show on MSNBC she provides expert commentary on U.S. elections, racial issues, religious questions and gender concerns for a variety of other media outlets. Keynote for Claiming Williams 2013 and part of the Class of ’71 Public Affairs Forum on Elections 2012.

Free and open to the public. For more information, see press release.