The PEAK: A Williams Talk Show 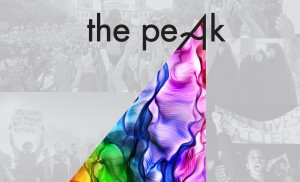 The Peak is a one-time Williams talk show borrowing Barbara Walters’ conception of ABC talk show, The View, that has run for 18 years. Like The View, The Peak focuses on a panel of four female co-hosts who discuss a variety of social and political issues both at Williams and in the world at large.  They will creatively preview the various events happening thru-out Claiming Williams Day. The panel consists of Kimberly Golding ’16, Fatima Anaza ’18, Elizabeth Dietz ’15, and Bushra Ali ’17. They will host live interviews and there are several surprises in store for the “studio” audience!

See our Covid-19 website for strict health and safety protocols for those who remain on campus. All Williams College buildings are closed to the public and visitors until further notice.