An evening with poet Safia Elhillo. Her first full-length collection, The 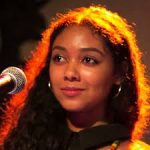 January Children, is forthcoming from University of Nebraska Press in early 2017. Sudanese by way of Washington, DC, she received a BA from NYU’s Gallatin School of Individualized Study and an MFA in poetry at the New School. Safia is a Pushcart Prize nominee, co-winner of the 2015 Brunel University African Poetry Prize, and winner of the 2016 Sillerman First Book Prize for African Poets. Safia has performed at venues such as the Kennedy Center in Washington, DC and the New Amsterdam Theater on Broadway, and has shared the stage with Questlove and Black Thought of The Roots, Gil Scott-Heron, The Last Poets, and Sonia Sanchez.

She has received fellowships from Cave Canem, The Conversation, and Crescendo Literary and The Poetry Foundation’s Poetry Incubator. In addition to appearing in several journals and anthologies including “The BreakBeat Poets: New American Poetry in the Age of Hip-Hop,” her work has been translated into Arabic and Greek. With Fatimah Asghar, she is co-editor of the anthology “Halal If You Hear Me.” Safia is an alum and former coach of the DC Youth Slam Team, and a founding member of New York University’s Slam NYU, and has shared her work on platforms including TEDxNewYork, BBC World Service, and the South African State Theater. Sponsored by SpeakFree.

Claiming Williams events are intended for the campus community. See the CW website for a full schedule of the day’s events.