Tarana Burke: The 'me too.’ Movement 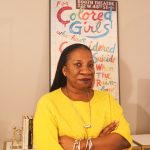 Tarana Burke, founder of The ‘me too.’ Movement & social justice activist will be interviewed on stage by Prof. Rhon Manigault-Bryant as the keynote event of Claiming Williams Day.

#MeToo, an overnight hashtag sensation, is now an international movement and rallying cry for people everywhere who have survived sexual assault and sexual harassment. Burke has dedicated more than 25 years of her life to social justice and to laying the groundwork for a movement that was initially created to help young women of color who survived sexual abuse and assault. The movement now inspires solidarity, amplifies the voices of thousands of victims of sexual abuse, and puts the focus back on survivors.

A sexual assault survivor herself, Burke is now working under the banner of The ‘me too.’ Movement to assist other survivors and those who work to end sexual violence. She is also senior director of programs at Brooklyn-based Girls for Gender Equity.On stage, she provides words of empowerment that lift up marginalized voices, enables survivors across all races, genders, or classes to know that they are not alone, and creates a place for comfort and healing to those who have experienced trauma.

Tarana’s continued work with the The ‘me too.’ Movement has earned her the honor of being named The Root 100‘s most influential person of 2018.

Claiming Williams invites the community to acknowledge and understand the uncomfortable reality that not all students, staff, and faculty can equally “claim” Williams. By challenging the effects of the College’s history of inequality that are based on privileges of class, race, ethnicity, gender, sexuality, and religion, we will provoke individual, institutional, and cultural change.

7:30 p.m. in Chapin Hall. Co-sponsored by the Minority Coalition, Women’s Gender and Sexuality Studies, and the Lecture Committee. This event is free and open to the public.